The EcoAir DD122 MK5 with Silver Nano Filter and Ioniser

For optimum health we need high quality air. The problem in the UK, especially in winter time, is that mould and fungi are very common. Consider then the effects of a baby who is breathing in contaminated air. Mould spores can cause permanent respiratory and lung problems especially in babies and those with allergies. Read on to learn about the best dehumidifier for babies.

Mould starts to grow at 65% relative humidity (RH) which is scary considering that the low average annual humidity level in London is 70%!

Households should have RH levels between 45%-55% depending on the season. Generally speaking a room RH level of around 50% is healthy during summer months while winter months RH levels can be a little lower at around 45%. If you would like to know the relative humidity levels in your house you can simply buy an inexpensive moisture detector (also known as hygrometers).

Note that if the air is too dry it can adversely affect your child as well.

A dehumidifier will, of course, bring the RH down to healthy levels and provide quality air in the process. However, all dehumidifiers are not equal.

Best Type of Dehumidifier for Babies

To keep bacteria, fungi, spores, dust mites etc at bay it is best to purchase a dehumidifier with an anti-bacterial filter.

In conjunction to an anti-bacterial filter you should look for dehumidifiers which feature an ioniser. Positive ions in the air make it difficult to breathe for those with allergies or asthmatic symptoms.

Basically what an ioniser does is release negative ions into the air. These negative ions then attach themselves to positive ions such as dust, spores and pollen. The enlarged ion becomes to heavy to float in the air and falls to the ground or into the dehumidifiers filter. Regular vacuuming will clear the enlarged ions.

Sometimes you may wish, or need, to give your baby a steam vaporiser

. A steam vaporizer will increase the humidity around the babies head but not around the whole room.

This way, when using both a steam vaporizer and dehumidifier, your baby will absorb the advantages of a more humid environment while still keeping mould at bay. 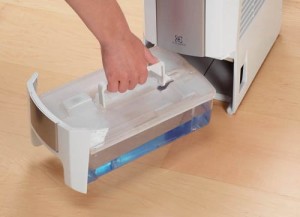 More Great Dehumidifiers For Your Child

and the Meaco DD8L Desiccant Dehumidifier

both of which feature anti-bacterial filters and ionisers.

Unfortunately dehumidifiers don’t do your laundry for you but they can certainly make drying clothes indoors very safe. Usually when you dry clothes indoors spore levels go through the roof as the rooms humidity levels jump. A humid room is a perfect breeding ground for mould spores. On top of this your windows are likely to form condensation and water will start running down your walls.

Through the use of a dehumidifier with laundry mode the above problems will not occur. Due to how they operate dehumidifiers also increase the air temperature of the room. Not only does this lead to a savings in energy bills but the increased heat helps to dry laundry faster.

Here are the three best dehumidifiers for babies and toddlers as mentioned above. 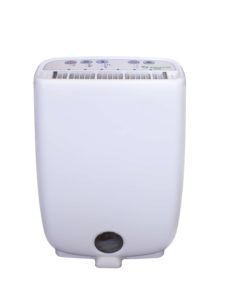 The Meaco DD8L features the best energy-saving technology from all the dehumidifiers on the market. Meaco calls this technology Control Logic.

Meaco estimates that by running the unit in a very low setting for 10 minutes out of every hour you can save up to 80% of energy costs over dehumidifiers that don’t have this feature. 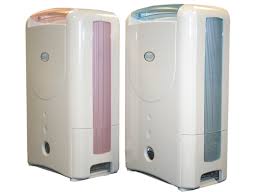 The Ecoair DD122MK5 is one of the most popular dehumidifiers on the market and features a nano-silver anti-bacterial filter as well as an ioniser.

Ecoair calls its energy-saving technology E7 Technology. E7 technology works on algorithms just like the Meaco DD8L but the difference between the two units is that once the DD122MK5 reaches its target humidity the unit switches into fan mode.

Fan mode is a very low fan setting which radically reduces the units energy requirements. Note however that the DD122MK5 does not go into sleep mode like the Meaco unit.

The EcoAir DD122MK5 does feature an adjustable louvre with which you can direct airflow to specific areas (such as wet walls or laundry drying on a horse rack).

The DeLonghi DNC65 is a great looking dehumidifier that is only 15cm wide and weighs just 5.5kg. Therefore its a very popular dehumidifier for smaller rooms.

If you are concerned about noise which may be a problem when your child is trying to sleep at night then you’ll be happy to hear that the DeLonghi DNC65 is one of the most quiet dehumidifiers on the market as it operates at around 34 decibels in its low setting.

I personally own the Meaco DD8L desiccant dehumidifier and I can’t recommend it enough, not only for babies, but for the whole household.

If you have any questions regarding dehumidifiers for babies and toddlers please ask in the comment section below and we will try to answer your question.

How Does a Dehumidifier Work