The EcoAir DD122MK5 and the Meaco DD8L dehumidifiers are very similar dehumidifiers and you may be wondering what the differences are between the two models.

if you are looking for an outdoor application, where the anti-bacterial filters and ionisers don’t matter, then I would suggest looking at the EcoAir Eco DD122FW

or the Meaco DD8L Junior dehumidifiers.

Both dehumidifiers feature overdry protection. This means that when using Laundry Mode or another high setting fror long periods of time the air may become too dry and uncomfortable. The dehumidifiers stop this problem by ceasing to function when the relative humidity falls too low (around 40%RH).

A comfortable RH level for a house would be around 50%. 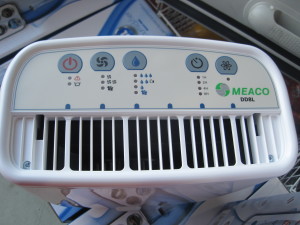 Both the EcoAir DD122MK5 and Meaco DD8L feature a soft touch control panel that is very easy to operate. The control panel of both dehumidifiers feature a timer with 2/4 and 8 hour options, a fault indicator which notifies the operator when the machine is overheating (in case of prolonged use in Laundry Mode for example) etc and an indicator which lights up when the water tank is full.

The first stated difference is the extraction rate. The EcoAir DD122MK5

extracts at 8 litres per day. The test environment for the EcoAir DD122MK5 was a little lower than that of the Meaco DD8L (20C/60%RH against 30C/80%RH) so actual daily extraction rates should be around the same for both machines. Your personal extraction rate will be due to the moisture of the area as well as the size of the area.

Both water tanks hold 2 litres of gray water and feature a lid for ease of carrying the full container to the sink. The water tank of the EcoAir DD122MK5

is situated at the rear of the dehumidifier.

Continuous drainage is available for both models although the hose comes supplied for the Meaco DD8L but not for the EcoAir DD122MK5.

. This difference is very small and probably won’t be noticed unless using the dehumidifier in the bedroom when you are trying to sleep.

which uses 330-650W. Each dehumidifier will probably consume around 30W when in fan only mode.

The weight for each dehumidifier is very similar with the EcoAir DD122MK5 weighing 6kg and the Meaco DD8L weighing 6.4kg. At this weight castor wheels are not an issue.

Note however that the Meaco DD8L

has carrying handles lower down forcing you to bend over more. 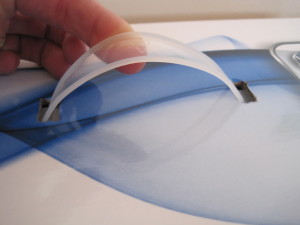 The Meaco DD8L Box Comes With A Convenient Carrying Handle

Of particular note is that the EcoAir DD122MK5

contains a 3D Louvre which can be used to push the air to a wide area or to a particular spot. The louvre is very handy for a particularly stubborn mould spot or for drying laundry indoors.

The louvre features a swing mode which means that the louvre can move to direct air into the area you want.

by contrast has a grille next to its control panel. Whilst this grille lets out warm air, which is up to 10C-12C warmer than surrounding air temperature, it is not as effective as having a louvre.

has 4 fan settings as follows:

As you can see the EcoAir DD122MK5

The two main differences are the fan settings. I personally prefer the larger range of settings of the Meaco although honestly I will only aim for 40% RH, or below, when drying laundry.

The MK5 has a 3D louvre which is an excellent feature for pushing warm air across the room or for pinpointing a particular area for quick drying (such as paint and laundry etc).

One minor feature that both dehumidifiers lack is a digital reading of the current relative humidity level. Instead the fan settings are designated by water droplets with one droplet being the lowest setting and three droplets being the highest setting with a picture of a T-shirt denoting Laundry mode.

and would recommend it highly.

However I am sure that purchasers of both the EcoAir DD122MK5

will be very happy with their decision.

How to Clean a Dehumidifier Filter