We are excited to review the Hysure 1500ml dehumidifier as at time of writing this dehumidifier has a 100% satisfaction rating!!

First of all you should know that the Hysure 1500ml is a peltier dehumidifier which is different than compressor and desiccant dehumidifier types. For the purposes of this review all you need to know is that you just plug the Hysure dehumidifier into a socket and it will work away fine.

Smaller dehumidifiers typically tend to be peltier types rather than the larger compressor and desiccant types.

Stated wattage is around 60-70 watts per hour which makes this dehumidifier very cheap to run.

Have a look at your electricity bill to find out your exact rate but assuming that your rate is 15p p/kWh then the Hysure 1500ml will cost around 1 pence per hour to run.

Despite the name suggesting an extraction rate of 1500ml you should know that the 1500ml figure relates to the size of the water tank not the extraction rate.

Rather the extraction rate is stated to be around 550ml per day. 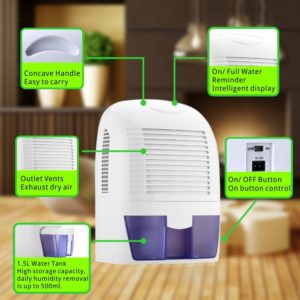 The water tank is situated on the front of the Hysure mini dehumidifier and as said above holds 1500ml.

A LED warning light comes on once the water tank is full to tell you that the tank needs to be emptied.

To explain this benefit clearly you can see that turning off the dehumidifier yourself and emptying the tank will only take around 2 minutes so your dehumidifier looses 2 minutes of running time during which there should be no change in humidity.

On the other hand if you let the water tank get full and the dehumidifier turns itself off then it might be half an hour or an hour or even longer until you might notice. By this time the humidity level will probably have started to rise again.

Due to the lack of compressor components and its small size the Hysure 1500ml dehumidifier is whisper quiet.

Stated operating volume is less than 25 dB(a) which makes this mini dehumidifier ideal for small bedroom use.

According to Amazon the Hysure dehumidifiers dimensions are 22 cm x 16 cm x 30 cm and the unit weight 2.1kg. 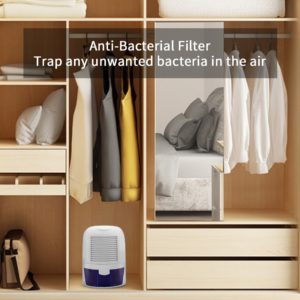 There is a 30 day standard return policy and a 2 year warranty.

What’s In The Box

At time of writing the Hysure 1500ml dehumidifier has a 100% satisfaction rating from 15 reviews which must mean that the unit performs as it should.

The Hysure has a better satisfaction rating than other mini dehumidifiers such as the AirPro, Duronic and Futura (which we love) models.

Here is what Amazon reviewers are saying.