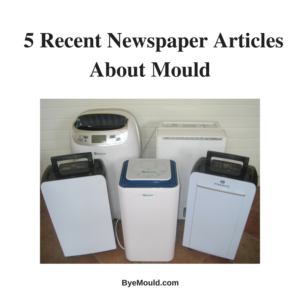 Towards the end of February and at the start of March mould still features in many homes across Ireland and the UK. Here are some recent newspaper articles about mould.

The Derby Telegraph reports that a single mum and her 4-year-old daughter have been living in a mould invested property for the last 4 years. Despite complains to Derby Homes, who had sent cleaners in to remove the mould, the problem still persists.

‘Terrible mould problem is putting our health at risk’

How to get rid of black mould in your bedroom

Paula Murphy has written an insightful interview style response in The Independent entitled ‘How to get rid of black mould in your bedroom’. Paula makes a lot of pertinent points and the article makes for good reading.

Laura Holland and Her.ie covers the dangers of drying clothes indoors. Byemould has warned readers of similar dangers in the past as problems caused by excess damp in the home can be acute.

This Dublin Live article relates the sad case of a homeless man who finally got his own flat. Despite initially being over the moon with his own flat the man soon realised that the flat was a damp trap and the accompanying photos show how widespread the mould has become.

Byemould always urges people to keep furniture away from the walls and to keep the property well ventilated and heated so that any damp  that is created through daily activities will be dispensed immediately.

7 Tips for Buying a Used Dehumidifier

Damp & Cracks– why is getting a survey so important?