I have a new Meaco DD8L dehumidifier in the house so I will be subjecting it to many tests for your, and admittedly my own, interest.

is actually my favourite dehumidifier for domestic purposes. The benefits of the DD8L can be found in this in-depth review of the Meaco DD8L Desiccant dehumidifier.

I live in a typical 3 bedroom house, in Ireland, and despite dry-lining the walls and upgrading the windows there are still moisture problems during cold periods. As you can see in the photo below condensation lines the window at 11am when the outside temperature is 1C. 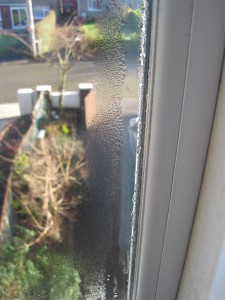 Initially the window was very wet with moisture at 11am in the morning!

So far we’ve had a Unibond Aero 360 dehumidifier, which is fine in warmer temperatures, however during cold spells we need a better stronger dehumidifier to take away excess moisture. The Unibond Aero 360 is actually situated in the bedroom next to the room in which this photo was taken as that room is affected by moisture as well.

The removal of condensation from this room, therefore, was the Meaco DD8L

‘s first task. The windows were closed however the bedroom door was left slightly ajar.

The Meaco DD8L’s settings were at fan speed 2 and the humidity removal level was set at the ‘thumbs up’ level. The result, after just a half hour, was as follows: 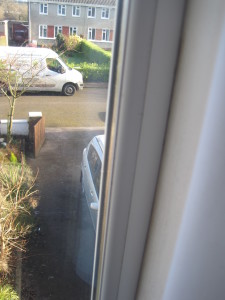 After half an hour the window was nice and dry thanks to the Meaco DD8L.

The condensation had almost totally cleared up. Of course if I had set the Meaco DD8L

on a higher setting the condensation would have disappeared much faster.

operated. This is a great benefit during cold spells as there is no need to turn the heating on in the area that the Meaco dehumidifier operates.

Of interest is that during this half hour the DD8L

removed nearly 200ml of water suggesting that there is a lot of moisture in the air. I will be conducting more tests with the Meaco DD8L

dehumidifier so stay tuned for more test results and in-depth information for your benefit!

Why you think that dehumidifier is necessary for you

Top 10 Awesome DIY Books Which Will Transform Your Home