The Aero 360 rates 4.1/5 on Amazon but some of the negative reviews were from people who placed the Aero 360 in an area which was to big for the unit to be effective.

It is important that you use the Unibond dehumidifier in the correct area. Many of the negative reviews seem to be left by people who used the Aero 360 for applications beyond the scope of the unit. The unibond 360 rates 4.1/5 on Amazon from over 3,250 reviews so if you use the unit in an appropriate area then it will work fine.

Who Is It For?

Amazon states that the Unibond Aero 360 is suitable for rooms up to 20m² such as kitchens and bedrooms etc.

From experience I think that such a space is too big and you would probably need a small electric dehumidifier for such a space especially if you want to dry a kitchen when and after cooking.

Rather you should use the Unibond 360 in smaller bedrooms such as box rooms, in wardrobes, presses and small spaces on boats and caravans etc.

If you are looking for a car dehumidifier we would recommend buying a bag type moisture absorber as the unibond 360 can easily fall over due to the jerking and turning of cars.

The top flap of this box, where you open and close the box, comes with two interlinking smaller flaps which makes the box nice and secure.

sits in this box unwrapped with the wrapped tablet sitting next to it.

Upon opening the box I looked at all the features and within a few seconds I knew where, and how to, place the tablet in the top area of the UniBond. If it takes you a little longer to figure out don’t worry, there are plenty of instructions on the box.

My first impression was therefore good and I especially like the modern look of the UniBond Aero. 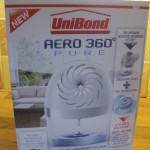 The Unibond Aero comes in two halves – a bottom half and a top half.

The bottom half is basically the water tank which can hold about 1 litre of water. Given that full sized dehumidifiers, such as the EcoAir ECO DD122FW Desiccant Dehumidifier

, hold 2 litres of water the UniBond compares favourably ( but of course the Aero 360 is far from a full size dehumidifier).

For easy visibility of the water level, the water tank is clear allowing you to know exactly when to empty the tank.

Also the water will be coloured blue making it super easy to see when the tank needs to be emptied and when all the water has been emptied.

and it’s also where the tablet sits.

The two halves are held together by two clips – one is a proper clip, the other is a spout that you can open when you want to empty the container. 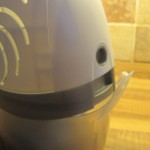 The pure tab is known as a 2 in 1 as it eliminates both mould and odours.

Bear in mind that the Aero 360 Pure tab should not come into contact with any metal surfaces such as gold and chrome etc. Leather, fabrics, carpets and any other easily damaged surfaces should also be avoided.

Made from ultra-absorbent crystals and featuring patented anti-odour technology, the 360 Pure tab can easily be placed in the UniBond by holding the wrapper that the tab comes in. If you do touch the tab simply wash your hands with warm water.

Obviously the Aero 360 tab should be kept away from children and pets.

You will know when to change the refill as the previously inserted tablet will have completely dissolved.

A frequently asked question is if the tablet is meant to spin around. The answer is that, no, it does not. 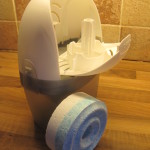 How Does The uniBond Aero 360 Work

The UniBond Aero 360 works using a natural process. There is no need for electricity or  batteries and as such is eco-friendly.

and swirls around, and through, the Aero Pure  tablet. The tablet then extracts moisture and odours from the air and this resultant moisture falls into the water tank in the form of a salty solution.

When the water tank is nearly full you simply unclip the drainage spout, tilt the UniBond Aero over a sink and empty the salty solution. The tablet will stay in place when you do this.

Should you tip the UniBond Aero at too much of an angle when emptying it the device will stop pouring due to an anti-spill protection mechanism.

The manufacturer of the UniBond Aero 360 Moisture Absorber

, German conglomerate Henkel, state that the UniBond Aero 360 is up to 40% more efficient than Henkels standard moisture absorber system.

The UniBond can be placed anywhere such as on the floor, on a bedside locker or on top of a wardrobe. Just be sure to place the UniBond Aero near the damp source and to keep it at least 10cm from any obstruction such as walls, clothes etc as the air needs to circulate around the device.

Personally I only place the unit on window sills.

I occasionally get asked if the Unibond Aero 360 can be used in the bathroom. Though most bathrooms are relatively small it is also a very, very  humid place. Therefore I don’t think that the Aero 360 will be effective in a bathroom. A better solution is to place a larger dehumidifier at the door of the bathroom (plugged in outside of the bathroom of course) and run it once you have finished your shower. 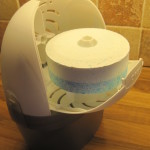 The UniBond Aero 360 Pure Moisture Absorber is a very popular damp controller and has such there are lots of reviews to read through.

If you read through the reviews you will notice that many of the negative reviews are from people that did not use the UniBond Aero correctly or for the wrong application. For example one reviewer used this in a new build and was unhappy. Obviously she does not know that new builds contain a lot of moisture from the timber used.

I can tell you that from my experience, if you use the UniBond Aero 360 Moisture Absorber

correctly and for the right situation, you will be quite happy with this moisture absorber.

Here are what verified purchasers are saying:

The UniBond Aero 360 takes a little while to work (around 12 hours for the first drop according to Henkel) however once it does work you’ll be very satisfied as condensation etc will be removed.

For the average sized bedroom in a semi-detached house the UniBond Aero 360 is ideal as I am seeing no more light condensation on the bedroom window. Just in case you are wondering I have my UniBond Aero on a locker next to the windows about 3-4 feet of the ground.

Since my Unibond aero is relatively new I will update this post at a later date to say how long the tablet lasted in my Unibond Aero.

I would definitely recommend the Unibond Aero 360 for purchase as long as the user knows that the Aero 360 will only tackle light damp problems.

Here is a quick review video that we made of the Unibond Aero 360 Moisture Absorber. The video simply condenses what is in the unibond 360 above.

If you have any questions about the UniBond Aero 360 moisture absorber just let us know in the comment section below and we will be happy to try and answer your question.